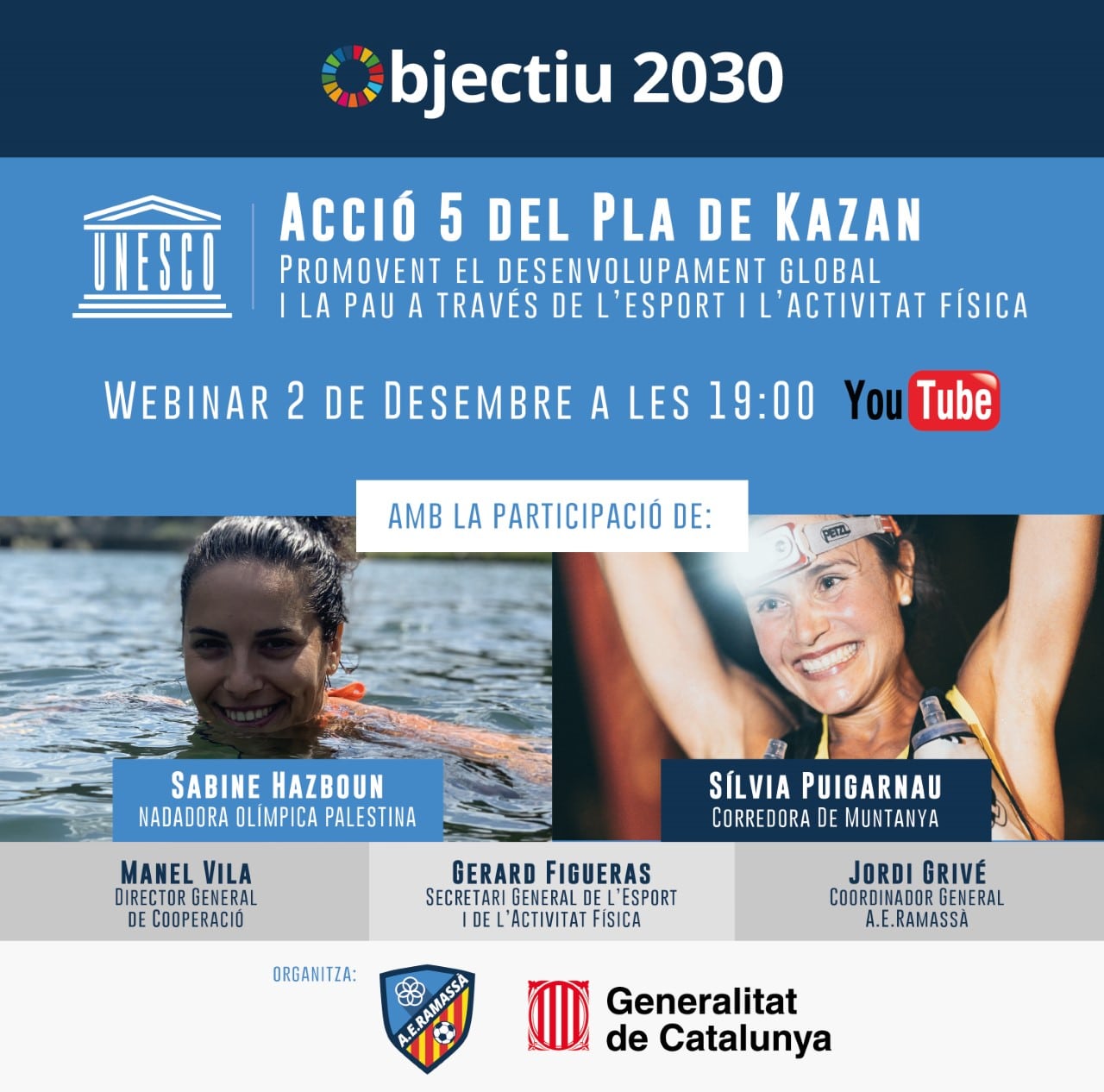 Posted at 10:16h in Uncategorized by A.E. Ramassà 0 Comments
0 Likes

On the 2nd of December at 7PM, both our organisation and the Government of Catalonia hosted the online seminar ‘Action 5 of the Kazan Action Plan’, where we spoke about the role of sport and physical activity in global development. Palestinian Olympic swimmer Sabine Hazboun and Catalan mountain runner Silvia Puigarnau were both in attendance.

This online seminar is featured in the United Nations’ 2030 Agenda, in a series of online public discussions that A.E Ramassà air frequently to publicise the United Nations’ Sustainable Development Goals (SDG) and its association with the world of sport.

On this occasion, Ramassà teamed up with the Directorate-General for International Cooperation and Development and the Secretariat-General of Sport and Physical Activity to present the evidence of two people who, through high performance sport, taught physical education to vulnerable groups which demonstrated a huge act of solidarity.

Manuel Vila, Director-General for International Cooperation and Development, and Gerard Figueras, Secretary-General of Sports and Physical Activity, were also in attendance and explained how the Government were fronting the UNESCO Action 5 of the Kazan Action Plan. This multidisciplinary government project promotes sport as a strategic tool in individual and collective development, conflict resolution, cohabitation and peace culture. At the end, Jordi Grivé, head coach of A.E Ramassà, explained the club’s social work, and our mission as the official club ambassador of the United Nations’ Sustainable Development Goals. Adrià Grau, from our usual partners Altair Viatges, ended the session.

The webinar is available to watch on our YouTube channel on the following link:

This website uses cookies to improve your experience while browsing the web. From these cookies, the cookies that are classified as necessary are stored in your browser, as they are essential for the basic functioning of the website. We also use third-party cookies that help us analyze and understand how you use this website. These cookies will be stored in your browser only with your consent. You also have the option of choosing which cookies to activate. But it can have a negative effect on your browsing experience.
Necessary Always Enabled

Shopping Cart
There are no products in the cart!
Continue Shopping
0